Common Languages You Should Know Today for Tomorrow’s Jobs

Our world is becoming more connected and language ability is becoming a basic job requirement in today’s professional world making it crucial to know the most useful languages to learn more than one language besides your native tongue to succeed in the modern job market.

This increase in the importance of mastering the most useful languages serves as a heads up especially for students and young adults.

Knowing different languages helps you take academic collaboration and networking to new levels. Make sure you are working toward the future you want by keeping up with the demands of a competitive job market.

College students, graduates, and young professionals can easily find a language program that works for them. Choose from in-person or virtual learning in a large number of world languages (more than 7000 world languages… wow!).

Professionals and students who are keen on building up their curricula vitae should focus on mastering a couple of the few languages. These commonly-used languages seem to be the most useful languages to impress today’s employers and recruiters more than others.

Mastering one, two or even three of the languages on this list will help you improve your communication skills with colleagues, correspond with clients, enjoy personal travels, succeed in business meetings, and gain many of the other benefits of being a polyglot. 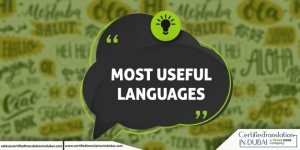 Transhome presents you with a brief list of the languages you should know according to the 5 countries with the strongest economies (and job market influence) in the world.

The Vanguard Group, an investment company that discusses the current status of the economies of the world noted that several countries have a remarkable influence over the global job market. They are:

1. China that rightfully earns the name, “world’s factory”. The populous country ranks as the global economy’s top influenced due to its purchasing power.

2. The United States has undeniable power over the economic world and makes up approximately a quarter of the global economy.

3. Japan has a strong hand in helping encourage a steady flow of investment. It holds the third position as a global economy influencer.

4. Germany comes in directly after Japan for its almost $310 billion trade economy and for being recognized as the world’s largest exporter of various goods.

5. India ranks fifth and is considered the fastest growing economy in the world

5 Most useful languages in the world based on the ranking we found:

Each of these languages is the predominant official dialect in the countries on the list. Now that you have this information, it is time to plan where your career path should start or gain momentum.

Turn your job skills to where the job market is headed.

We hope you will give Transhome a call for all your language needs in one of these languages or the 120 other dialects our professional translators can handle expertly.