Surprising Facts About the Irish Language

SURPRISING FACTS ABOUT THE IRISH LANGUAGE: WHICH ONES DID YOU ALREADY KNOW?

A country’s language and dialects help make our world varied and the Irish are well-known for its history and current popularity. Irish, like French and Italian, is proving its ability to stand strong through the years. Read on for some interesting facts about the language.

❖ Irish is also known as Gaeilge
❖ The Irish language has been spoken all over Ireland and spread through Scotland, the west coast of Britain and the Isle of Mann, Since the Cristian era.
❖ Irish is the oldest written language in the north of the Alps by the Roman alphabet.
❖ The Irish also called Gaelige by foreigners is very different from Gaelic. Let’s find out how. 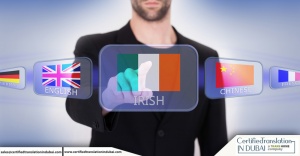 Gaelige is the name of the Irish language in… well, Irish. Gaelic is the adjective referring to Irish people’s behavior and culture. Gaelige is not used as frequently as you would expect. Surprisingly and accordingly to ‘’NEW Central Statistics Office,” less than half of the population (39.8%) speaks native Irish fluently. A mere 4.2% speaks the language outside of the education system while an astonishing 23.8% of the current population has never spoken Irish.

The resilience of a Language

Somehow, the oldest language in Western Europe is managing to survive. The education system is to be thanked for helping Irish live for as long as it has. Learning and using the language is a typical curriculum requirement that is adjusted for each grade level. Like English, French, Arabic, and Spanish, the formal language is taught in its purest, mot correct, form in schools. Outside the gate is another story.

Irish Outside the Classroom

Ireland only has two official languages, Irish and English. According to the 2011 census, 66.3% of people surveyed stated that they spoke Irish in some capacity or some form. Only about 40,000-80,000 people across the globe speak some form of language. Sadly, even in Dublin, the country’s capital, the number of fluent speakers is surprisingly low (only 29.2 of the total population).

Plans to Strengthen the Language

A 20-Year Strategy for the Irish Language is a governmental plan to strengthen the language. The program aims to encourage the populations of English-speaking areas in Ireland to start using the native Irish language again. The government program that started in 2010 is still getting mixed reviews and results.

Transhome talked about Dead Languages and why the slow decline of native languages may be the people’s fault.  We also have a direct hand in helping a language live. The Irish government’s 20-Year Strategy is just one example. Another is accessible language courses and the ease of transportation we have in modern times.